crescent_gaia
Fic Title: A Dystopian Romance
Pairing(s): Steve/Tony, Steve/Tony/Bucky, Clint/Natasha, slight Pepper/Coulson (blink and you'll miss it)
Rating: PG-13
Universe: MCU with a twist of the Extremis comic storyline
Word Count: 12,800
Warnings: None
Summary: In an alternate universe, the Senate, in it's infinite wisdom, decided to pass an act that made anybody with superpowers an enemy of the state if decided upon by a committee headed by Senator Stern. After the events of Iron Man 3 and Winter Soldier, Tony Stark and Steve Rogers are declared such enemies along with Natasha Romanov and Clint Barton.
Notes: A HUGE thank you to

leperu for being a very patient person with me. Another huge thank you to

sirona_gs for running the challenge. My apologies for this being extremely late but life went explode-y.

msbarrows
Fic Title: Off The Rails
Pairing(s): Past Brock Rumlow/Bucky Barnes
Rating: Mature
Universe: MCU
Word Count: 32K
Warnings: Warnings for homophobic language and violence.
Summary: Sam Wilson finds himself being recruited at gunpoint to assist in the rescue of the Winter Soldier from HYDRA's hands, by the last person he'd ever have imagined having any interest in doing so: Brock Rumlow.

Fic Title: Catch a Falling Knife
Rating: PG13
Universe: MCU
Word Count: 5000
Warnings: Brainwashing, dehumanization and the other issues that come with the Winter Soldier.
Summary: He can't avert his eyes, suddenly. The back of his head prickles with something that wants to be familiarity, recognition, but all it does is confuse him. He doesn't understand. He squints to read the name under the photo on the tiny screen. Steve Rogers. 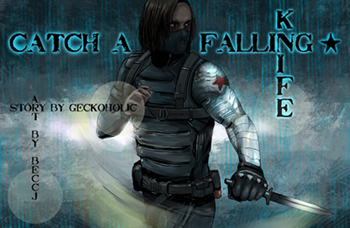 In Hearts We Leave Behind

ratherastory
Fic Title: In Hearts We Leave Behind
Pairing(s): Steve Rogers/Bucky Barnes
Rating: R
Universe: MCU
Word Count: 7,623
Warnings: None
Summary: Bucky is looking for answers.
Spoilers: Everything up to and including CA:TWS 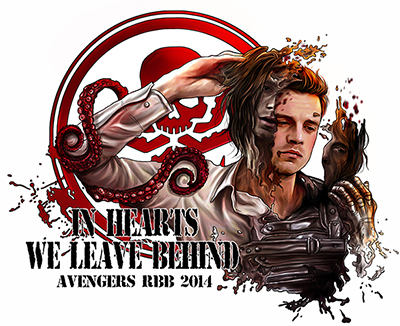 boothangg
Art Prompt Title: "You look like you could use a smoke" (or Untitled)

crescent_gaia
Fic Title: The Private Detective and the Bootlegger
Pairing(s): Steve Rogers/Tony Stark, Clint Barton/Natasha Romanov, Phil Coulson/Pepper Potts
Rating: Mature
Universe: MCU
Word Count: 8,774
Warnings: None
Summary: A noir fic where Steve is a private investigator and Tony is a bootlegger. Steve gets hired one day to look into a secret Tony is keeping and it is so not what Steve thinks it might be.
Notes: So, welcome to my first attempt at Noir / PI fic. I hope that everyone likes it. For clarification, no, nobody has powers but Steve is still buff and Tony is... well, Tony. Thanks to

boothangg for a wonderful art prompt and to Tatra for being my amazing beta-er / cheerleader. Also, thank you to

sirona_gs to running this wonderful challenge and putting up with me. :)

sirona_gs
Fic Title: Nick & Nat's Unusual Adventure
Pairing(s): Natasha Romanova/Nick Fury, background Clint Barton/Phil Coulson
Rating: E
Universe: MCU/The Avengers (Movies), Marvel 616, Agents of SHIELD
Word Count: 13,678
Warnings: Graphic descriptions of violence, blood, more warnings in the AO3 post.
Summary: So this is how you fall into decisions that shape the rest of your life - you hear a cheeky little bastard snarking at you over comms, and somehow decide that trusting them is a good idea. (The fact that it turns out to be one has no bearing on the matter.) Or, the story of how Nick met Natasha and S.H.I.E.L.D. shaped itself around them.
Notes: Please be aware that I have mixed and meshed and twisted Marvel 'verses together so much that I don't even know what's which anymore. This has elements of MCU and Agents of SHIELD and Marvel 616, I have played very fast and loose with ages, and incorporated a lot of different canons into this story. I would like to ask you to suspend disbelief and let yourself be carried along for the adventure. Enormous thanks are due to Lanyon, for betaing this story and checking my comics canon and being so very encouraging and enthusiastic about it. <3 Also, many thanks to RosaLui who took the time to answer my Japanese questions and correct my abysmal vocabulary. You are a star, bb. <3 And, as always, all my love to CinnamonAnna and 17Pansies for being the best and listening to me as I rambled on and on about this story. I don't know what I'd do without you, darlings. <3

blue_jack
Fic Title: What if I Were To
Pairing(s): Steve/Tony
Rating: Teen
Universe: MCU Alternate Universe
Word Count: 9.6K
Warnings: Pre-serum!Steve, mutant!Steve, references to IM3
Summary: “I know I said you could pick my next PA, but this is ridiculous.”

Talk about things coming back to bite you in the arse.


Or: The Iron Man Origin Story, in which Tony Stark builds himself some friends and trips over a family.

Spans from Tony's childhood through to 2013; all relationships are background, Clint/Coulson is blink-and-you'd-miss-it, and Steve/Tony can be read as platonic.
Notes: Thanks to

dandelionfire for the beta and for being my sounding board. And, of course, thank you to my very, very patient artist for a fabulous foundation; I doubt this is what you were expecting, but I hope it serves all the same.

Title from Grace Potter & the Nocturnals’ “The Lion the Beast the Beat”. Please see the master post and second "chapter" for all additional notes.

lanyon to beardsley for beta-duty and to

lilibel for being so wonderful to work with. (and

lanyon for being such a fantastic partner in crime)

flipflop_diva
Fic Title: We're Only An Illusion
Pairing(s): Skye/Ward. But featuring Skye, Ward, May, Coulson, Jemma, Trip and John Garrett
Rating: R
Universe: Agents of SHIELD
Word Count: 5,228
Warnings: No archive warnings apply, although there is sex. And a lot of angst.
Summary: It changes everything when you find out someone you trust isn't who you thought they were — every memory, every moment, every encounter. For Skye, finding out Ward is Hydra is a hard pill to swallow. But not everything is always as it seems. Set during most of Season 1 of Agents of SHIELD. Spoilers through the finale.